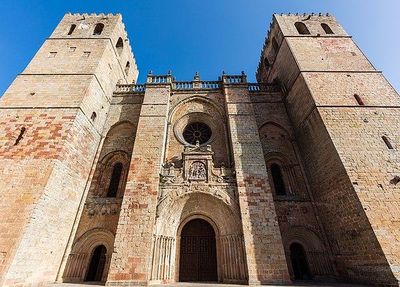 The Cathedral of Sigüenza, officially Catedral de Santa María de Sigüenza, is the seat of the bishop of Sigüenza, in the town of Sigüenza, in Castile-La Mancha, Spain. It was declared Bien de Interés Cultural in 1931.
It is dedicated to Santa María la Mayor, patron saint of the city of Sigüenza. It had its origin in January 1124, when the bishop Bernard of Agen reconquered the city to the Muslims, during the reign of Urraca of León "the Reckless", daughter of Alfonso VI of León and Castile. He was appointed bishop in 1121 , by the archbishop of Toledo, Bernard of Sédirac, of the Order of Cluny, continuing the influence of this introduced monastic order in the Kingdom of Castile by Alfonso VI and Alfonso of Aragon, husband of the Castilian queen. This bishop obtained from Alfonso VII of León and Castile privileges and donations with which to increase the new population, unifying the two towns: the upper around the castle and the lower one, the Mozarabic, around the channel of Henares River.