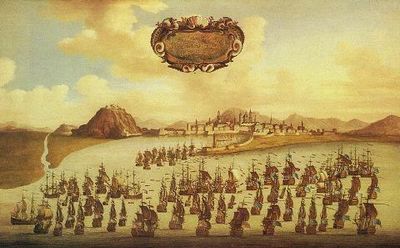 The Siege of Barcelona took place between 3 and 27 April 1706 during the War of the Spanish Succession when a Franco-Spanish army laid siege to Barcelona in an attempt to recapture the city following its fall to an English-led Allied army the previous year.
After the Earl of Peterborough entered Valencia in triumph in January of 1706, Barcelona was left vulnerable. This led the French to change the plans of attacking Valencia and try to besiege Barcelona instead, while the city was blocked from the sea-side by the Count of Toulouse. The Spanish forces were led by Philip V, while René de Froulay, Comte de Tessé was placed in charge of the French land forces during the siege.