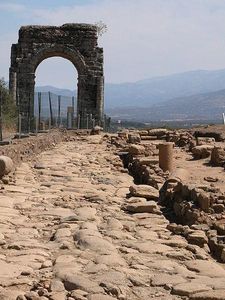 The Roman city of Cáparra is located in the north of Extremadura in the valley of the River Alagón.
In Roman times it was in the province of Lusitania within the Conventus Iuridicus Emeritensis, whose capital was Colonia Augusta Emerita . It was approached via the Roman road known as the Vía de la Plata and is now permanently abandoned. It is said to have been a pre-Roman city, although this remains unconfirmed and has been questioned by some authors, on the grounds that the flat location did not meet the defensive requirements of a pre-Roman town and only a few pottery remains have been found.
The walled city covered an area of approximately 15-16 hectares, although it is known that in the area northwest of the city there were many houses, so that the settled area is thought to have been much larger than the walled area. The city was smaller and less important than some other Roman cities of the Iberian peninsula, but was among the main population centres between the Tagus river and the Sierra de Gredos, along with Caurium , Augustobriga and Egitania .