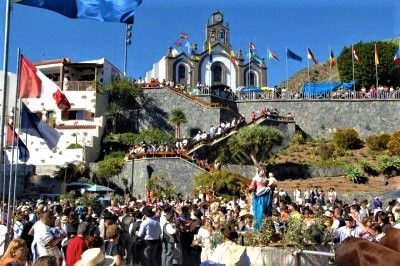 The historic areas of Santa Lucía are well worth a visit. Highlights include a walk to the famous fortress of Fortaleza de Ansite, a volcanic building where there are many caves which were used for dwellings and burials by the native inhabitants and where a large number of archaeological items have been found. It is also possible to see burial sites in natural caves in the fortress, normally associated with inhabited areas.

Burial mounds are found less frequently in this municipality and have only been recorded in the area of Pozo Izquierdo, at the beach of the same name.
The first chapel in Santa Lucía was built in honour of Santa Lucía in the second half of the sixteenth century. In 1761, as the chapel was not well preserved, the inhabitants decided to knock it down and build another one in the same place but on a different plot of land. The second chapel was blessed in 1761, although it did not survive long due to its poor state of preservation. It was finally demolished and in 1788 the image of Santa Lucía was transferred to the chancel of a new chapel, although this third chapel suffered the same fate as the two previous ones. Then in 1905, the church Iglesia de Santa Lucía was built right in the town square, on a rise, replacing the third chapel. These days it is one of the main places to visit in the municipality.

The Museo Castillo de la Fortaleza, in the centre of Santa Lucía, is also recommended to visitors for its historical and cultural interest. It is primarily an archaeological museum, as the exhibits are of remains found in the archaeological sites of the area. Ethnographical, botanical and zoological items can also be viewed. There is a garden near the museum with autochthonous flora and fruit trees from several latitudes.
Those who prefer excursions in the natural surroundings of the municipality should not miss la Caldera de Tirajana, in the central area of Gran Canaria with a southeast orientation. This is wide volcanic basin where the towns of Santa Lucía and San Bartolomé de Tirajana are located. The landscape here is considered unique, as it combines the rugged scenery of the territory, the architecture, the richness of the vegetation and the agricultural scenery.

The Barranco de Tirajana (the Tirajana ravine) has its origins in the Caldera de Tirajana and it runs into the sea around the flat land at Juan Grande. This ravine has a length of 76 square kilometres and there the visitor can see different archaeological, botanical and geological aspects of interest. A dam called the Presa de la Sorrueda has been built in its basin. In these surroundings stand the most beautiful and extensive palm groves on the island. They are especially attractive in the Palmeral de la Sorrueda which lies near the dam.