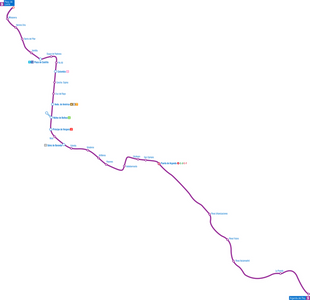 Line 9 of the Madrid Metro is a rapid transit line in Madrid that originally opened on 31 January 1980 between Sainz de Baranda and Pavones. Later it was extended from Avenida de América to Herrera Oria on 3 June 1983, though this section was at the time separate from the original part until the missing fragment from Avenida de América to Sainz de Baranda was opened on 24 February 1986.

On 1 December 1998, the line was extended from Pavones to Puerta de Arganda. The stations in this section were marked with a unique wall color in each station, making it easy to spot one's destination from the train. For example, Pavones is white, Valdebernardo is yellow, Vicálvaro is a light shade of turquoise, and San Cipriano is orange. This approach is being applied in many other new or recently refurbished stations like Sevilla on Line 2, though there is no representation of the colours on official system maps.