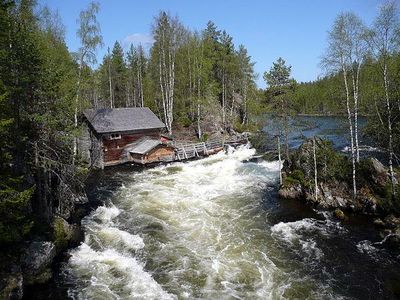 Oulanka National Park is a national park in the Northern Ostrobothnia and Lapland regions of Finland, covering 270 square kilometres . The park was established in 1956 and was expanded in 1982 and 1989. It borders the Paanajärvi National Park in Russia. The first inhabitants in the area were Sami people from Lapland who lived here until the end of the 17th century, which was when they had to give way to Finnish settlers. Although hunting, fishing and later farming was the primary occupation of the people who lived there, today the most notable activity in Oulanka is tourism. From the 1930s, the Finnish Tourist Association kept boats on the river and renovated the wooden cabins found across the park for accommodation purposes. These cabins can be used free of charge by any hikers in the area, given that they follow some basic guidelines and rules regarding the state of the cabins, the wood supply, and protecting the surrounding nature.
From 2002, Oulanka was the first of the two Finnish national parks which became part of World Wide Fund for Nature's PAN Parks, the other one being the Southwestern Archipelago National Park.