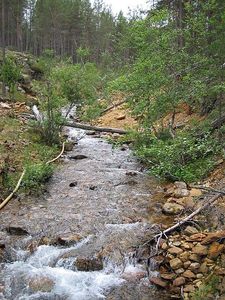 Lemmenjoki National Park is situated in area of municipalities of Inari and Kittilä, Lapland, in Northern Finland. It was founded in 1956 and has since been expanded twice. Its total area is 2,850 square kilometres , making it the biggest national park of Finland and one of the largest in Europe.

Around 100 people can be seen digging gold in the area in the summer on 40 claims. Most of the people in the park – around 10,000 people per year – are backpackers, though. There are about 60 kilometres marked paths in the national park, and even some bridges and boats are put up for travelers. There are more than ten free wilderness huts in the park and three chargeable, bookable ones.