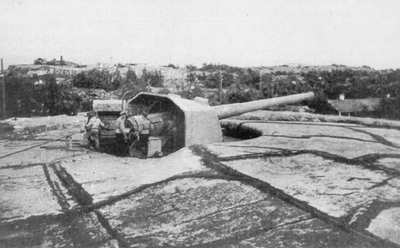 Russarö is an island south of Hanko. The island is closed to the public as it is military area of the Finnish Defence Forces. The island has a five-story stone lighthouse built in 1863 and a Finnish Meteorological Institute weather station.
On 1 December 1939, the Soviet light cruiser Kirov, accompanied by the destroyers Stremitelny and Smetlivy, approached the fortified coastal artillery battery located on the island. After a short exchange of fire, Stremitelny and Kirov were hit and the ships withdrew. 17 men were killed aboard Kirov and 30 wounded.