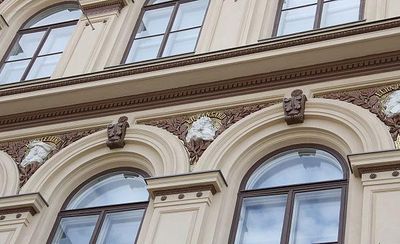 Ateneum is an art museum in Helsinki, Finland and one of the three museums forming the Finnish National Gallery. It is located in the centre of Helsinki on the south side of Rautatientori square close to Helsinki Central railway station. It has the biggest collections of classical art in Finland. Before 1991 the Ateneum building also housed the Finnish Academy of Fine Arts and University of Art and Design Helsinki.

The collections of Ateneum include Finnish art extensively from 18th-century rococo portraiture to the experimental art movements of the 20th century. The collections also include some 650 international works of art. One of them is Vincent van Gogh's Street in Auvers-sur-Oise , which when deposited to Ateneum in 1903 made it the first museum collection in the world to include a Vincent van Gogh painting. Other notable works include Albert Edelfelt’s The Luxembourg Garden , Akseli Gallen-Kallela’s Aino Triptych , Eero Järnefelt’s Under the Yoke and Hugo Simberg’s Wounded Angel .