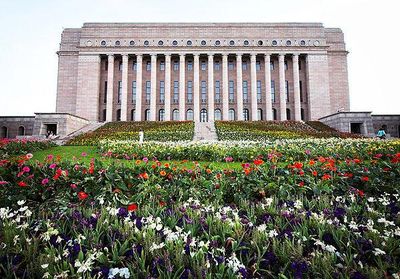 The Parliament of Finland is the unicameral supreme legislature of Finland, founded on 9 May 1906. In accordance with the Constitution of Finland, sovereignty belongs to the people, and that power is vested in the Parliament. The Parliament consists of 200 members, 199 of whom are elected every four years from 13 multi-member districts electing 7-36 using the proportional D'Hondt method. In addition, there is one member from Åland.

Legislation may be initiated by either the Government or one of the members of Parliament. The Parliament passes legislation, decides on the state budget, approves international treaties, and supervises the activities of the government. It may bring about the resignation of the Finnish Government, override presidential vetoes, and alter the constitution. To make changes to the constitution, amendments must be approved by two successive parliaments, with an election cycle in between, or passed as an emergency law with a 167/200 majority. Most MPs work in parliamentary groups which correspond with the political parties. The Parliament currently comprises nine parliamentary groups. Since the establishment of the Parliament in 1905, the parliamentary majority has been held once by a single party: the Social Democrats in the 1916 election. Thus, for the Government to gain a majority in the Parliament, coalition governments are favored. These are generally formed by at least two of the three historically major parties: the Social Democrats, Centre, and National Coalition. Ministers are often but not necessarily MPs. The Parliament meets in the Parliament House , which is located in central Helsinki.