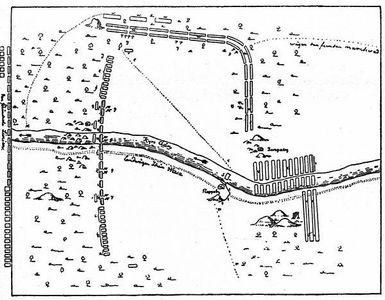 The Battle of Napue was fought on February 19, 1714 / March 2, 1714 at the villages of Napue and Laurola in the Isokyrö parish of the Swedish Empire between the Swedish Empire and the Tsardom of Russia. It was the final land battle of the Finnish campaign in the Great Northern War. The Swedish detachment, consisting almost entirely of Finnish troops, were defeated by the numerically superior Russian force. As a result, all of Finland fell under Russian military occupation for the rest of the War; a seven-year period of hardship known in Finland as the Great Wrath.
The Kyrö Distillery Company named its Napue rye gin after the battle in 2014.
By 1703 Russian forces had reached the inner parts of the Gulf of Finland, and founded the city of Saint Petersburg. Since the Swedish main army was engaged in Poland and later in Russia, Sweden was hard pressed to defend its Baltic territories. After the battle of Poltava, Russia took all of Livonia, Estonia and Ingria, as well as the counties of Viborg, Savonlinna and Kexholm.