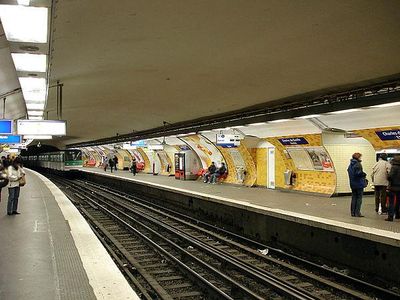 Charles de Gaulle–Étoile is a station of the Paris Métro and of Île-de-France's regional high-speed RER. It serves lines 1, 2, 6 of the Paris Métro and line A of the RER and lies on the boundary of the 8th, 16th, and 17th arrondissements of Paris. Originally called simply Étoile, after its location at Place de l'Étoile, it took on the additional name of President Charles de Gaulle from 1970.

The station serves as the western terminus of Paris Métro Line 6. The platforms are built beneath Place de l'Étoile, which is situated at the western end of the Avenue des Champs-Élysées. The Arc de Triomphe is located in the center of the Place. Lines 1 and 2 have two side platforms each, while the terminus on Line 6 is a single track with two platforms situated in a loop; passengers alight on the left platform and board on the right. Trains depart immediately from this station and make a longer stop at Kléber.