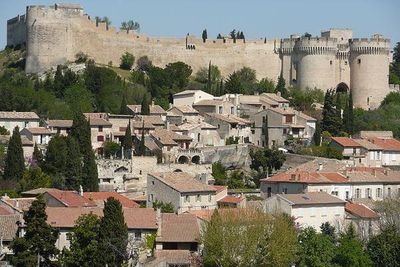 The Fort Saint-André is a medieval fortress in the commune of Villeneuve-lès-Avignon in the Gard département of France, dating from the first half of the 14th century.
The treaty of Meaux-Paris, signed in 1229 at the end of the Albigensian Crusade, handed the French crown land to the west of the Rhone from Pont-Saint-Esprit to the Mediterranean and a joint interest in the city of Avignon. In 1290 the French king, Philip IV , ceded his claim to Avignon to his father's cousin, Charles II of Naples who was the Count of Provence through his marriage to Beatrice of Provence.