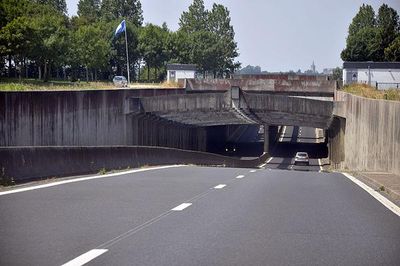 Carentan is a small rural town near the north-eastern base of the French Cotentin Peninsula in Normandy in north-western France near the port city of Cherbourg, with a population somewhat over 6,000. It is a former commune in the Manche department. On 1 January 2016, it was merged into the new commune of Carentan-les-Marais. The town was a strategic early goal of the World War II landings as capturing the town was necessary to link the lodgements at Utah and Omaha beaches which were divided by the Douve River estuary . The town was also needed as an intermediate staging position for the capture of the cities of Cherbourg and Octeville, with the critically important port facilities in Cherbourg.
Carentan is close to the sites of the medieval Battle of Formigny of the Hundred Years' War. The town is also likely the site of the historical references to the ancient gallic port as Crociatonum a possession of the Unelli tribe as it is situated on the Douve River slightly inland from the beaches at Normandy—geographically, such gentle terrain as is nearby down the river valley is excellent for boat building