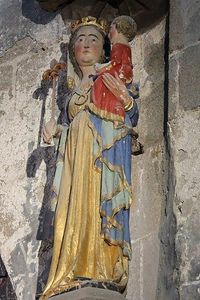 Dol-de-Bretagne Cathedral is a Roman Catholic church located in Dol-de-Bretagne. The cathedral is dedicated to Saint Samson, one of the founding saints of Brittany. It was formerly the seat of the Archbishop of Dol, one of the nine ancient bishoprics of Brittany. The cathedral suffered badly from the excesses of the French Revolution, becoming successively a "Temple de la Raison", then a stable, then a warehouse. Revolutionaries caused considerable damage and many treasures were lost. When it eventually returned to being a house of worship, its role as a bishopric was abolished by the Concordat of 1801 when the Dol diocese was merged into the Dioceses of Rennes and Saint-Brieuc. The Concordat of 1801 was an agreement between Napoleon and Pope Pius VII, signed on 15 July 1801 in Paris, which sought national reconciliation between revolutionaries and Catholics. The Concordat was abrogated by the law of 1905 on the separation of church and state.
The building is notable for its eclectic mix of styles and idiosyncrasies, such as the incomplete north tower on the main west-facing entrance. The tower was begun in 1520 but never finished due to lack of funds. A local myth has it that the top was knocked off by the devil, who threw the nearby Dol-de-Bretagne menhir at the building.