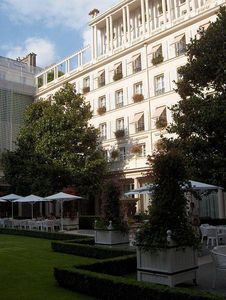 Hôtel Le Bristol is a five star hotel located in Paris, France at 112 rue du Faubourg Saint Honoré, in the heart of the fashion, design, and art district. Hôtel Le Bristol opened in 1925 and is famous for its historic architecture and luxurious interior. The hotel is part of the Oetker Collection, Masterpiece Hotels which is owned by one of Europe's richest families, the Oetkers founded by Rudolf August Oetker.

Rue du Faubourg St.Honoré`s history begins in 1715 when the French monarchy begins to reestablish itself in Paris. Following the death of King Louis XIV, and during the 18th and 19th Rue du Faubourg St. Honoré saw mansions of the French elite being built on what was once a marshland. The street originally served as a path leading from the gates of St. Honoré to a small village called Roule, so named for the church of St.Phillippe de Roule found there. The word Faubourg means that this area of Paris was once a suburb, and was reintegrated into the city in 1860.