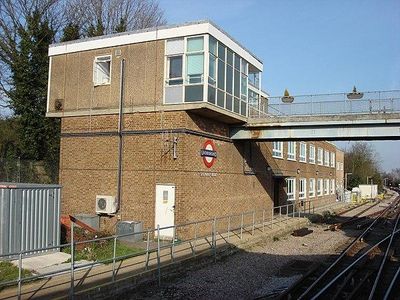 Upminster is an interchange station serving the town of Upminster in the London Borough of Havering, Greater London. It is on the London, Tilbury and Southend Railway , 15 miles 20 chains down the line from London Fenchurch Street; it is the eastern terminus of the District line on the London Underground; and it is the eastern terminus of the Romford to Upminster Line on the London Overground network. The station is managed by c2c, which operates the LTSR main line services. The station was opened in 1885 by the LTSR; its original entrance and structure beside the main line platforms survive from that date. A larger entrance and ticket hall on Station Road was built by the London, Midland and Scottish Railway in 1932 and has since been extensively modernised and includes a number of retail units. Today the station is owned by Network Rail. Upminster is located within Travelcard Zone 6.

The London Tilbury and Southend Railway connected the City of London and its terminal station at Fenchurch Street with the port at Tilbury Dock in 1854, extending out to the seaside town of Southend in 1856. The route to Southend was not direct, taking a considerable diversion in order to serve the docks at Tilbury. Between 1885 and 1888 a new direct route from Barking to Pitsea was constructed, with the station at Upminster opening on 1 May 1885. The next station to the east was East Horndon and to the west was Hornchurch.