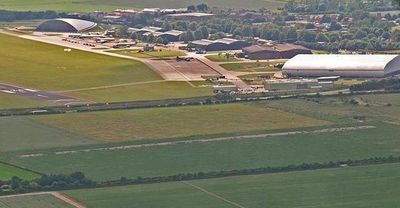 Imperial War Museum Duxford is a branch of the Imperial War Museum near Duxford in Cambridgeshire, England. Britain's largest aviation museum, Duxford houses the museum's large exhibits, including nearly 200 aircraft, military vehicles, artillery and minor naval vessels in seven main exhibition buildings. The site also provides storage space for the museum's other collections of material such as film, photographs, documents, books and artefacts. The site accommodates several British Army regimental museums, including those of the Parachute Regiment and the Royal Anglian Regiment.
Based on the historic Duxford Aerodrome, the site was originally operated by the Royal Air Force during the First World War. During the Second World War Duxford played a prominent role during the Battle of Britain and was later used by United States Army Air Forces fighter units in support of the daylight bombing of Germany. Duxford remained an active RAF airfield until 1961. After the Ministry of Defence declared the site surplus to requirements in 1969 the Imperial War Museum received permission to use part of the site for storage. The entirety of the site was transferred to the museum in February 1976.