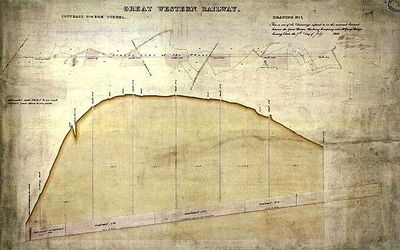 Box Tunnel passes through Box Hill on the Great Western Main Line between Bath and Chippenham. The railway tunnel is 1.83 miles in length, straight, and descends on a 1 in 100 gradient from its eastern end. The west portal is Grade II* listed and the east portal is Grade II listed.
Box Tunnel was constructed between December 1838 and June 1841 for the Great Western Railway under the direction of Isambard Kingdom Brunel. Building such a tunnel was considered dangerous at the time because of its length and the composition of the underlying strata. The main contractor was George Burge of Herne Bay. For many years, it was rumoured that Brunel had aligned the tunnel so that the rising sun would be visible through it on his birthday, April 9. On 30 June 1841, it was opened with little ceremony. When completed, it was the world's longest railway tunnel.