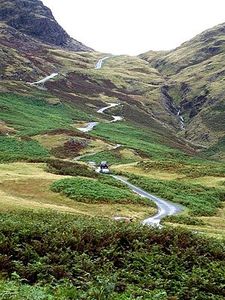 Hardknott Pass is a hill pass that carries a minor road between Eskdale and the Duddon Valley in the Lake District National Park, Cumbria, England. The tarmacked highway, which is the most direct route from the central Lake District to West Cumbria, shares the title of steepest road in England . It has a maximum gradient of 1 in 3 .
The pass takes its name from Hard Knott which is derived from the Old Norse harthr and knutr . Note also that Canute had a son called Hard Knutr.