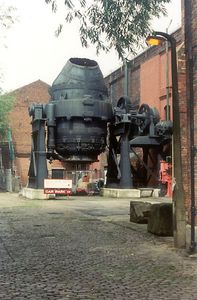 The Kelham Island Museum is an industrial museum on Alma Street, alongside the River Don. It was opened in 1982.

The island on which it is located is man-made, resulting from the construction of a mill race, in the 12th. century, which diverted water from the River Don to power a corn mill belonging to the Lord of the Manor.

This building was replaced by a power station, in 1899, to provide electricity for the new fleet of trams in the city. These are the premises now occupied by the museum.