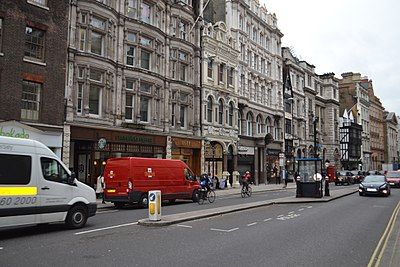 Fleet Street is a major street in the City of London. It runs west to east from Temple Bar at the boundary with the City of Westminster to Ludgate Circus at the site of the London Wall and the River Fleet from which the street was named.
Having been an important through route since Roman times, businesses were established along the road during the Middle Ages. Senior clergy lived in Fleet Street during this period where there are several churches including Temple Church and St Bride's. Fleet Street became known for printing and publishing at the start of the 16th century and it became the dominant trade so that by the 20th century most British national newspapers operated from here. Much of the industry moved out in the 1980s after News International set up cheaper manufacturing premises in Wapping, but some former newspaper buildings are listed and have been preserved. The term Fleet Street remains a metonym for the British national press, and pubs on the street once frequented by journalists remain popular.