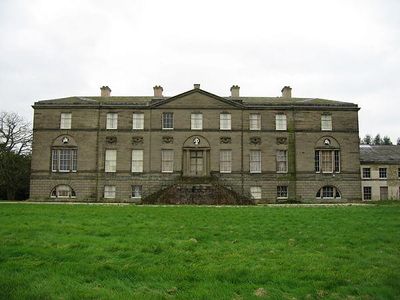 Source: Kittybrewster at the English Wikipedia

Doddington Hall is a country house in Doddington Park in the civil parish of Doddington, Cheshire, England. It is recorded in the National Heritage List for England as a designated Grade I listed building. The house was built for Rev Sir Thomas Broughton between 1777 and 1798 to a design by Samuel Wyatt. It was built to replace an older house, of which Delves Hall was a part, a short distance to the north. The house is constructed of Keuper sandstone ashlar with a slate roof and lead flashings in three storeys. It is in neoclassical style with an entrance front of nine bays.