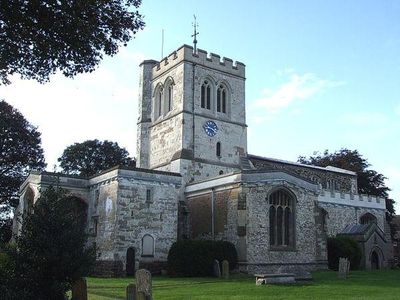 Toddington is a large village and civil parish in the county of Bedfordshire, England. It is situated 5 miles NNW of Luton, 4 miles north of Dunstable, 6 miles SW of Woburn, and 35 miles NNW of London on the A5120 and B579. It is 0.5 miles from Junction 12 of the M1 motorway and lends its name to the nearby motorway service station. The hamlet of Fancott also forms part of the Toddington civil parish.
Toddington is built around a large village green, around which sit the parish church and four of the village's six public houses. The Dunstable Northern Bypass taking heavy traffic bound for Dunstable from the M1 away from the village was delayed but a restart was announced in September 2011, now due to open in 2017. A large-scale housebuilding programme has been proposed by the government for the environs of Luton, Dunstable and Milton Keynes, and proposals to build a 20,000 seat football stadium to replace Kenilworth Road were withdrawn in 2008.