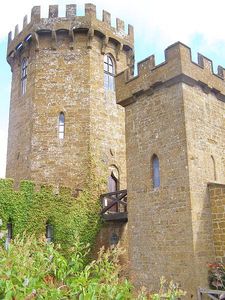 Radway is a village and civil parish in Warwickshire about 7 miles north-west of Banbury in neighbouring Oxfordshire. The population taken at the 2011 census had reduced to 238.
The village is at the foot of Edge Hill and is notable for the Battle of Edgehill, one of the early major engagements of the English Civil War, which was fought in fields around the village and in the adjoining parishes of Ratley and Kineton.