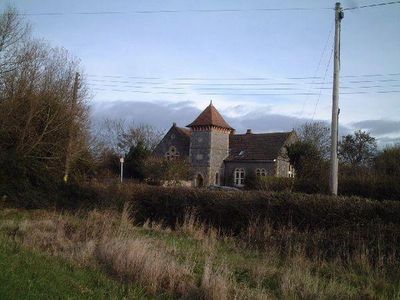 Lympsham is a village and civil parish six miles west of Axbridge and six miles south-east of Weston-super-Mare, close to the River Axe in Somerset, England. The parish includes the hamlet of Wick where Wick Farmhouse dates from the mid 18th century.
It has been suggested that the name means 'a suitable home' from the Old English ge-limplic and ham. More probable is a combination of a personal name beginning "Lin-" or something like "lind-pyll" with "ham" . The first appearance of the name in records is in 1086 Domesday Survey: It is certain that King William laid a heavy hand on the estates of the monastery—'quamplures ex suis commilitionibus ex Glastoniæ feudavit possessionibus.' Malmesbury does not tell us of the losses but only the fact that afterwards the Conqueror relented somewhat towards this old English monastery, and gave back the estates of Podimore, Milton, Fullbrook, Berrow, Burrington, Lympelesham, Blackford and Wootton. At the time of the Conquest the monks suffered the loss of some of their estates, but these were afterwards recovered and even William the Conqueror made reparation for what he had robbed them of. The possessions of the abbey amounted to the huge extent of 818 hides. The 'twelve hides' consisting of the site, precincts and immediate demesne of the abbey was regarded as an ungeldable and unhidated liberty of which the islands of Meare, Panborough, and Edgarley formed part. As far as these estates lay in Somerset the details of the endowment will be found in the account of the Survey
A History of the County of Somerset: Volume 2 Edited by William Page.