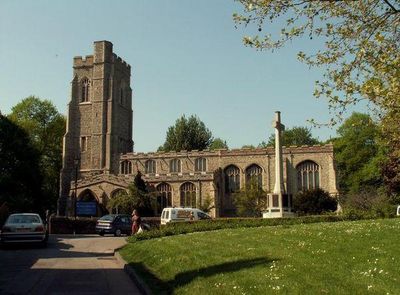 Sudbury is a small market town in the English county of Suffolk. It is located on the River Stour near the Essex border, and is 60 miles north-east of London. At the 2011 census, the parish has a population of 13,063, rising to 21,971 including the adjoining parish of Great Cornard. It is the largest town of Babergh district council, the local government district, and is represented in the UK Parliament as part of the South Suffolk constituency.

Evidence of Sudbury as a settlement originates from the end of the 8th century during the Anglo-Saxon era, and its market was established in the early 11th century. Its textile industries prospered during the Late Middle Ages; the wealth of which funded many of its buildings and churches. The town became notable for its art in the 18th century, being the birthplace of Thomas Gainsborough, whose landscapes offered inspiration to John Constable, another Suffolk painter of the surrounding Stour Valley area. The 19th century saw the arrival of the railway with the opening of a station on the historic Stour Valley Railway, and Sudbury railway station forms the current terminus of the Gainsborough Line. During World War II, US Army Airforce bombers operated from RAF Sudbury.