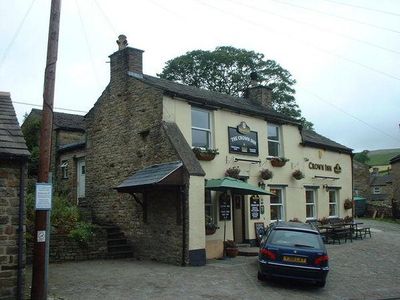 Askrigg is a small village and civil parish in Wensleydale in the Yorkshire Dales National Park. It is part of the Richmondshire district of North Yorkshire, England. The village and its parish are located in Upper Wensleydale, 12 miles west of Leyburn, and 5 miles east of Hawes. It is 26.4 miles west of the county town of Northallerton.

The village is mentioned in the Domesday Book as Ascric. At the time of the Norman invasion the manor was held by Arnketil. Afterwards the lands were owned on behalf of the Crown by Count Alan of Brittany who granted then lordship of the manor to Gospatric, son of Arnketil. By 1251 the manor had come to the Fitz Hugh family who were also lords of Ravenworth and stayed with them until the 16th century. In the early 16th century the manor became the possession of Sir Thomas Parr. His son William died without issue in 1571 when it became the property of the Crown. In 1664 the manorial rights were leased from the Crown by the Metcalfe family.