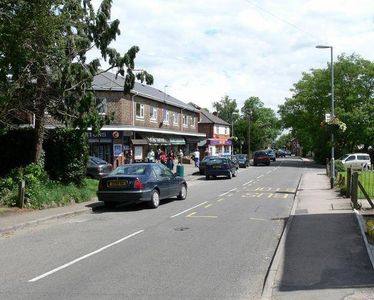 Kirby Muxloe is a village and civil parish that forms part of the Blaby district of Leicestershire, England. Located to the west of Leicester, its proximity to the city has resulted in its inclusion in the Leicester Urban Area. The Leicester Forest East parish border runs along the Hinckley Road A47. According to the 2001 census, the parish had a population of 4,523, which had increased to 4,667 at the 2011 census.
The name "Kirby" comes from the Dane Caeri who established the community here in the late ninth or early tenth century. The settlement was known as Carbi, and then later Kirby. The village was recorded in the Domesday book as 'Carbi'. with a working population of 8. At the time the land in Kirby Muxloe was owned by Hugh de Grandesmaynel and by William Peverel.
In 1461, William Hastings, the 1st Baron Hastings of Hungerford, became the Steward of the Honor of Leicester and Ranger of Leicester Forest. His father, Sir Leonard Hastings, had owned a modest estate in Leicestershire and Gloucestershire, where the family had long been established. On 14 April 1474 Hastings acquired the manorial right to Kirby from the Pakeman family, although he had rented it for some years previous to this. In 1480 he began to build the moated Kirby Muxloe Castle during the period of the Wars of the Roses. However, work on the castle stopped soon after Lord Hastings was executed on 13 June 1483 on the orders of Richard, Duke of Gloucester at the Tower of London for conspiracy. William was caught up in the rivalry for the throne after the death of Edward IV.