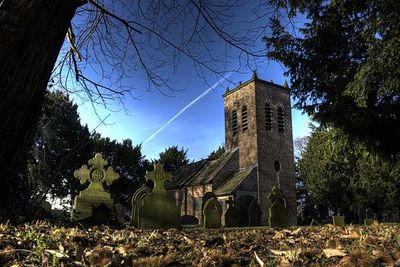 Warburton is a village and civil parish within the Metropolitan Borough of Trafford in Greater Manchester, England. Historically in Cheshire, Warburton lies on the south bank of the River Mersey between the borough of Warrington and Greater Manchester. In the 21st century, the village remains predominantly rural. Altrincham is the nearest town. According to the 2001 census, the parish had a population of 286.
Warburton has a history of settlement stretching back to the 11th century, with the possibility of earlier habitation. There are 17 listed buildings in the village, including the timber framed Grade I Church of St Werburgh, which is at least 700 years old. Among the other listed buildings are examples of architect John Douglas' work, including the second Church of St Werburgh, built in 1883. In 2006, Time Team excavated in the lands of Moss Brow Farm in Warburton, looking for a Roman fortlet.