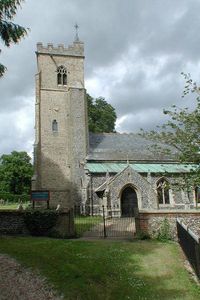 North Pickenham is a village in the Breckland district of mid-Norfolk, East Anglia, England. It lies three miles, as the crow flies, from the Georgian market town of Swaffham.
At the 2001 census it had a population of 500 and an area of 1,015 hectares reducing to 472 at the 2011 Census. Norfolk has about one-thirtieth of the population density of Central London, the tenth lowest density county in the country, with 38% of the county's population living in the three major urban areas of Norwich , Great Yarmouth and King's Lynn .