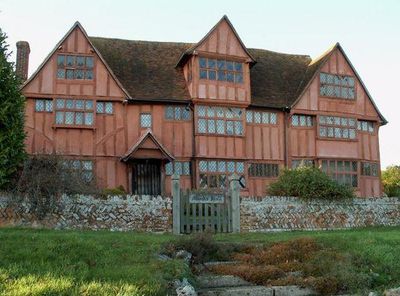 Glemsford is a village in the Babergh district in Suffolk, England, near the town of Sudbury. Glemsford is located near the River Glem and the River Stour also flows nearby. Glemsford is surrounded by arable farmland and is not far from historic Suffolk villages such as Lavenham and Long Melford.

The village dates back to the Domesday Book in 1086, in which Glemsford was recorded. The village has noteworthy features such as Monks Hall, which is a medieval timber structure. It is said that a tunnel once connected Monks Hall to the nearby Parish Church of St Mary the Virgin, which the monks formerly used to access the church instead of mixing with the ordinary villagers. Only a small part of this tunnel remains. The Parish Church of St Mary the Virgin dates back to the early 14th century, with the earliest recorded rector being Hugh de Poynton in 1302. The church features the Golding Chapel, built in memory of the rich Glemsford cloth merchant, John Golding. Golding lived in the Angel House, another timber building adjacent to The Angel public house, which serves traditional real ales. Golding left money for the chapel to be built when he died, likewise as with other parish churches St Mary's Church tower was rebuilt in the 19th century. Monks Hall itself has gone through changes of use and appearance through the centuries and is now a private residence. Glemsford Methodist Church is situated at the other end of the village and dates from the Victorian era.