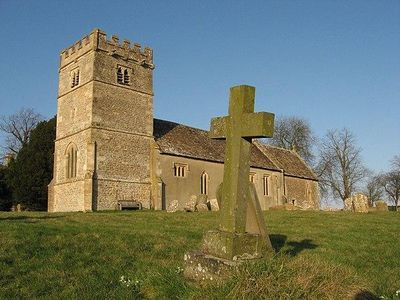 Great Coxwell is a village and civil parish about 2 miles southwest of Faringdon in the Vale of White Horse, England. It was in Berkshire until the 1974 boundary changes transferred it to Oxfordshire. The 2001 Census recorded the parish's population as 274.
The parish is 2 1⁄4 miles long north – south and slightly more than 1 1⁄2 miles wide east – west. Part of its southern boundary is formed by a stream that flows west to join the River Cole south of Coleshill, about 1 mile west of the parish. The stream runs in the bottom of a valley that runs roughly from east to west. Part of the parish's western boundary is formed by a brook that joins that stream.