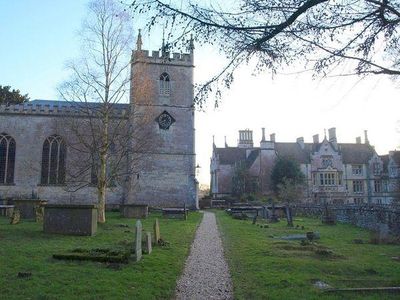 Alderley is a village and civil parish in the Stroud district of Gloucestershire, England, about fourteen miles southwest of Stroud and two miles south of Wotton-under-Edge. It is situated on the Cotswold Way near to the hamlets of Hillesley and Tresham and lies underneath Winner Hill between two brooks, the Ozleworth and Kilcott.
The village has an entry in the Domesday Book of 1086, where it is referred to as Alrelie meaning "Woodland clearing where alders grow" . It is recorded as being located in the hundred of Grimboldestou with a total population of 16 households whilst also boasting 2 lord's plough teams, 7 men's plough teams, 12 acres of meadows and 1 mill; in 1066 the Lord of the Estate was the Saxon thegn Wigot of Wallingford, whereas in 1086 it was the wealthy Norman landowner Miles Crispin.