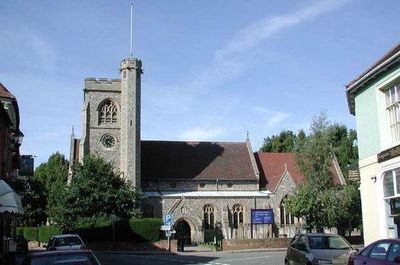 Welwyn is a village and civil parish in Hertfordshire, England. The parish also includes the villages of Digswell and Oaklands. It is sometimes called Old Welwyn to distinguish it from the much newer settlement of Welwyn Garden City, about a mile to the south, though some residents dislike the suggestion of inferiority or irrelevance that tends to be implied by the moniker "Old" and prefer Welwyn Village. When saying where they live, locals will often be asked, "Welwyn or Welwyn Garden City?", as the latter's title is often shortened to simply Welwyn. To avoid confusion, there were plans to change Welwyn’s name to ‘Welwyn Minster’ in 1990 but this met with local resistance and the idea was abandoned.

The name is derived from Old English welig meaning "willow", referring to the trees that nestle on the banks of the River Mimram as it flows through the village. The name itself is an evolution from weligun, the dative form of the word, and so is more precisely translated as "at the willows", unlike nearby Willian which is likely to mean simply "the willows".