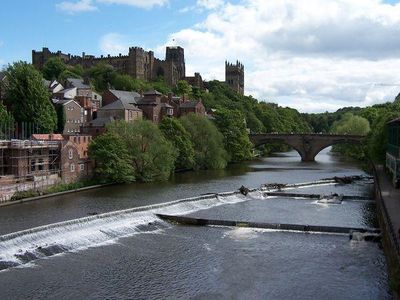 The City of Durham is a cathedral city and the county town of County Durham in North East England. The city lies on the River Wear, to the south-west of Sunderland, south of Newcastle upon Tyne and to the north of Darlington. Founded over the final resting place of St Cuthbert, its Norman cathedral became a centre of pilgrimage in medieval England. The cathedral and adjacent 11th-century castle were designated a World Heritage Site by UNESCO in 1986. The castle has been the home of Durham University since 1832. HM Prison Durham is also located close to the city centre. City of Durham is the name of the civil parish.
The name "Durham" comes from the Celtic element "dun", signifying a hill fort and related to -ton, and the Old Norse "holme", which translates to island. The Lord Bishop of Durham takes a Latin variation of the city's name in his official signature, which is signed "N. Dunelm". Some attribute the city's name to the legend of the Dun Cow and the milkmaid who in legend guided the monks of Lindisfarne carrying the body of Saint Cuthbert to the site of the present city in 995 AD. Dun Cow Lane is said to be one of the first streets in Durham, being directly to the east of Durham Cathedral and taking its name from a depiction of the city's founding etched in masonry on the south side of the cathedral. The city has been known by a number of names throughout history. The original Nordic Dun Holm was changed to Duresme by the Normans and was known in Latin as Dunelm. The modern form Durham came into use later in the city's history. The north-eastern historian Robert Surtees chronicled the name changes in his History and Antiquities of the County Palatine of Durham but states that it is an "impossibility" to tell when the city's modern name came into being.