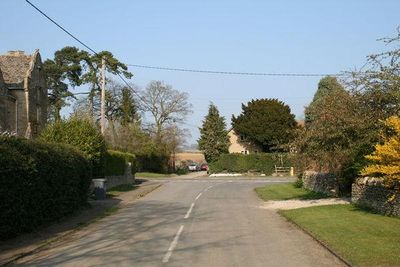 Lyneham is a village and civil parish about 5 miles southwest of Chipping Norton, Oxfordshire. It is bounded to the southwest by the River Evenlode, to the southeast by the A361 road linking Chipping Norton and Burford, and on other sides by field boundaries. The 2011 Census recorded the parish's population as 153.
Lyneham Camp or the Roundabout is a former Iron Age hill fort about 1 1⁄2 miles northeast of the village beside the A361 road. It was excavated in 1956. About 250 yards southwest of the hill fort is Lyneham Longbarrow, which was excavated in 1894. The barrow is of Cotswold-Severn type and contains two chambers. North-west of the barrow is a standing stone that it is believed was originally part of the barrow.