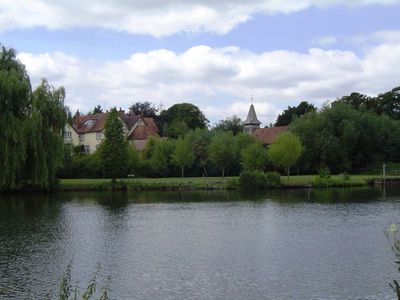 Moulsford is a village and civil parish and former manor in South Oxfordshire. Before 1974 it was in the county of Berkshire, in Wallingford Rural District, but following the Berkshire boundary changes of that year it became a part of Oxfordshire, in the district of South Oxfordshire. Moulsford is on the A329, by the River Thames, just north of Streatley and south of Wallingford. The west of the parish is taken up by the foothills of the Berkshire Downs, including the Moulsford Downs , Moulsford Bottom and Kingstanding Hill are traditionally associated with King Alfred and the Battle of Ashdown. Like many other villages in Oxfordshire and Buckinghamshire it has been used for the filming of Midsomer Murders.

Moulsford parish church began as a chapelry of Cholsey. The first known record of the chapel dates from between 1220 and 1227. The botanist and geologist John Stevens Henslow was its vicar in the 1830s. In 1846 most of the mediaeval church was demolished and the current Church of England parish church of Saint John the Baptist, designed by Sir George Gilbert Scott, was built on its foundations. Scott's Gothic Revival building retains the west wall of the original church, which includes a 13th-century Early English Gothic lancet window, and the timber frame of the bellcote.