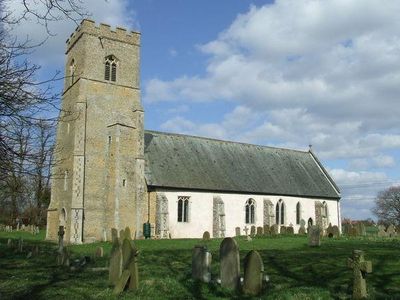 Blo' Norton is a village and civil parish in the Breckland district of Norfolk, England, on the River Little Ouse, about 6 1⁄2 miles west of Diss. The 2001 Census recorded the parish population as 270 people, living in about 100 households.
Blo' Norton's unusual placename is reputedly derived from ‘Blae’, itself derived from Old English and Old Norse words meaning both ‘cold’ and ‘blue’. The ‘blue’ could refer to the woad plant that grows in wetter areas and is a source of traditional blue dye. ‘Norton’ is a settlement on the north side of the river.