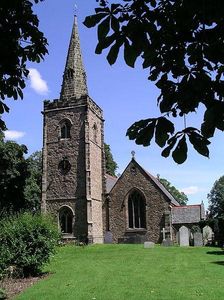 Desford is a village and civil parish in the Hinckley and Bosworth district, 7 miles west of the centre of Leicester. The parish includes the hamlets of Botcheston and Newtown Unthank and a scattered settlement at Lindridge. The population at the 2011 census had increased to 3,930.

At Lindridge about 1 mile north of the town is a rectangular moat up to 13 yards wide enclosing an area about 115 yards by 127 yards . In the 19th century it was temporarily drained and six early 14th century pottery vessels were found. A building such as a manor house is likely to have stood on the island created by the moat. The moat is a scheduled monument.