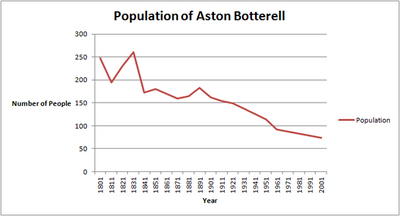 Aston Botterell is a village and small civil parish in the county of Shropshire, West Midlands, England. The village lies 8 miles south-west of the market town of Bridgnorth and 10 miles north-east of the town of Ludlow. The nearest main roads are the B4364 and the A4117. According to the 2001 census, the civil parish had a population of 74. The area's economy is still largely based on agriculture, though many residents travel up to 12 miles to work in other sectors such as the service and manufacturing industries.
The name of Aston Botterell is derived from the Old English for "eastern settlement ", with 'Botterell' being the name of a former local landowning family: William Botterell is recorded as holding the manor in 1203.His family came over with William of Normandy in 1066. Before Saxon times, the only evidence for human activity in the area comes from the discovery of two flint arrow heads found near what is now Bold Farm. The Domesday Book of 1086 describes the manor of Eston at the time as having a population of 14 households h 2 [wit[villein]]s, 3 bordars, 6 serfs and 3 radmans; it was held by Tochil, from Rainald, and is recorded as having been held by a landowner called Elric in the time of Edward the Confessor. During the time of the Domesday survey, the village was in a district made up of what are now known as Aston Botterell, Norton and Charlcotte; however they were split up not long after the Norman Conquest of 1066.