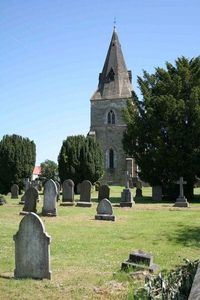 Misterton is a village and civil parish in the Bassetlaw district of Nottinghamshire, England. The population of the civil parish at the 2011 census was 2,140.
Misterton is located in the far north-east of both Bassetlaw and Nottinghamshire between Walkeringham to the south and Haxey to the north. The east of the village is bordered by the River Trent and the west by farmland. The village is situated six miles north-west of Gainsborough on the busy A161 which runs between Beckingham and Goole. The Doncaster to Lincoln Line runs north-south to the east of the village. Currently there is no station on the line between Gainsborough and Doncaster. The village is the last along the A161 road , before Lincolnshire – the Isle of Axholme. The B1403 meets the main road here, which is for Gringley-on-the-Hill. The A161 is the main road through to the Isle of Axholme, entering it when half a mile north of crossing the River Idle at Haxey Gate Bridge next to the Haxey Gate Inn; the river meets the Trent in the parish. The Trent Valley Way and Cuckoo Way, which follow the Chesterfield Canal at this point, cross the Trent at West Stockwith.