RouteYou » Wikipedia » Places of interest » Cley next the Sea 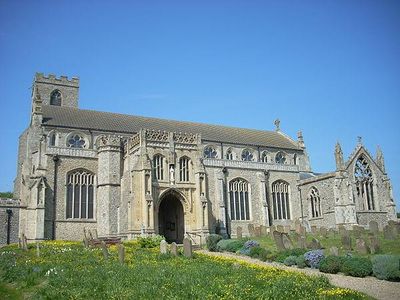 Cley next the Sea () or (), Anglo-Saxon Clæg "clay", is a village and civil parish on the River Glaven in Norfolk, England, 4 mi north-west of Holt and east of Blakeney. The main A149 coast road runs through the centre of the village, causing congestion in the summer months due to the tight, narrow streets. It lies within the Norfolk Coast AONB and the North Norfolk Heritage Coast. In 2011 its population was 437.

The Grade I listed medieval church of St Margaret's, Cley is the largest church in the Blakeney Haven area. The huge nave dates from 1320–1340. Before the end of the 14th century, a large south porch was added.