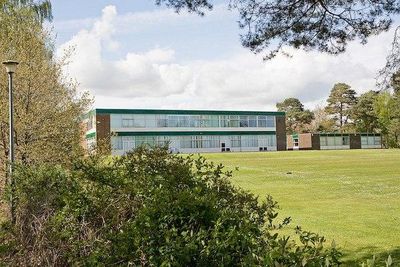 North Baddesley is a large village and civil parish in Hampshire, England. It is situated 3 mi east of the town of Romsey and 6 mi north of Southampton. It occupies an area of approximately 9.15 km2 , and is home to a population of just over 10,000 people, reducing to 7,000 at the 2011 Census. It is located in the Test Valley; a river famous for trout fishing. North Baddesley is one of the largest villages in the South of England.

The Domesday Book of 1086 shows North Baddesley or Badeslei as it was then called as a small hamlet with a church, four farms, seven small holdings and a wood sufficient for ten hogs valued at 60 shillings . The most notable event in North Baddesley's past was the arrival in the 12th century of the Knights of St John of Jerusalem, later known as the Knights Hospitaller, and their acquisition of the overlordship rights in the late 14th century. However, long before this, half the manor had already been transferred to the Knights as early as 1304, when the little church of All Saints was re-dedicated to St John the Baptist, the patron saint of Hospitallers. The church was almost opposite the Hospitallers preceptory, on the site now occupied by the present manor house. The Black Death of 1348–49 resulted in the transfer of the Hospitallers Hampshire headquarters from Godsfield near New Alresford to North Baddesley.