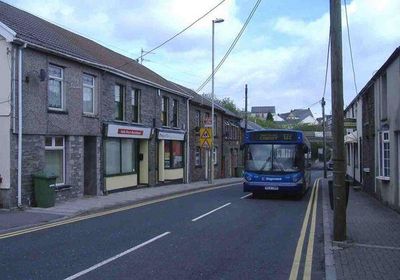 Tonyrefail is a village and community in the Rhondda Cynon Taf County Borough, Wales. It is situated at the head of the River Ely; 4 miles northwest of Llantrisant, about 1.5 miles from Trebanog and about 2 miles from Williamstown. Tonyrefail was a rural hamlet and evolved into an industrial village during the second half of the 19th century, when coal and steel became synonymous with the South Wales Valleys. The population at the 2001 census was 11,035.
Tonyrefail derives from the Welsh Ton yr Efail meaning the forge on the meadow . From ton, meaning lea or grassland and efail meaning forge.