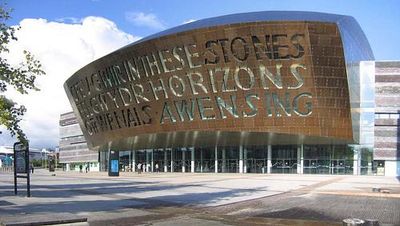 Cardiff Bay Opera House was a proposed centre for the performing arts in Cardiff Bay, Cardiff, Wales, conceived in the 1990s as a crucial part of the Cardiff Bay redevelopment project. One aim of the scheme was to create a new home for the Welsh National Opera company, which was then based in the New Theatre in Cardiff. The Wales Millennium Centre was built in its place and it opened in 2004.
The plan, supported by the Cardiff Bay Development Corporation, was to construct a permanent home for Welsh National Opera on a site near the Inner Harbour, Cardiff Bay. An international design competition was held and was eventually won by the Iraqi-born architect Zaha Hadid. The Hadid design was called the Crystal Necklace by some in the media. However, the project failed to win financial support from the Millennium Commission, the body which distributed funds from the UK National Lottery.