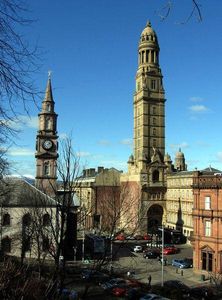 Inverclyde was formerly one of nineteen districts within Strathclyde Region, from 1975 until 1996. Prior to 1975, Inverclyde was governed as part of the local government county of Renfrewshire, comprising the burghs of Greenock, Port Glasgow and Gourock, and the former fifth district of the county. Its landward area is bordered by the Kelly, North and South Routen burns to the southwest , part of the River Gryfe and the Finlaystone Burn to the south-east.