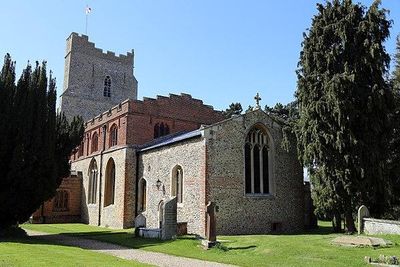 The village is 7 miles northwest from the city of and county town of Chelmsford. The parish includes the hamlets of Bishop's Green and Stagden Cross. Parsonage Brook, at 450 yards north from the village flows northeast to southwest, meeting at the west of the parish the River Can, whose chief source is at the north, 2.5 miles from the village, near Bishop's Green. High Easter is part of 'The Easters', an area adjacent to The Rodings. The population of the parish at the 2011 Census was 754.
The name 'High Easter' refers not to the Christian festival 'Easter', but to the 11th-century Estre , from the Old English eowestre meaning a sheep fold, or 'a place at the sheep fold'. The 'High' part refers to the Old English heah , the place name being Heyestre in 1254. The sister village of Good Easter to the south, has the same origin. By 1200 that place was called Godithestre, the 'Good' part of today's place name derived from the Anglo-Saxon woman's name of Godgyth or Godgifu, who probably held possession of the place. High Easter developed as a linear settlement to the west of the parish church and was known as 'High Estra' before the Norman Conquest. The 'High' in the name is because of its elevated position, and also to distinguish the village from its neighbour, Good Easter. The village was also latterly known as 'High Easton'.