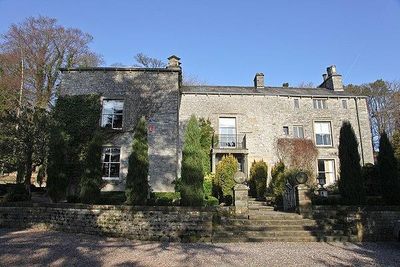 Austwick Hall is an historic manor house situated above the village of Austwick in North Yorkshire, England. The house is a Grade II listed building and contains a collection of furniture, paintings and ethnographic art. The gardens and woodland also contain a collection of contemporary sculptures. Austwick Hall is open to the public from the beginning of April to the end of October and takes guests for bed and breakfast throughout the year.

It is claimed by some historians that the hall was originally a pele tower dating from the 12th century. Although the manor is recorded in the Domesday Book of 1086, the first record of the hall is not until 1551, when it was purchased by Sir John Yorke from the Duke of Suffolk. The hall was later sold to John Ingleby, a relative of the Yorke family. It has been suggested that the hall was rebuilt at this point, as three of the fireplaces and west chimney stacks date from the late 16th century. The Ingleby family owned the hall for the next two hundred years. The most notable member of the family was Sir Charles Ingleby. Having trained as a barrister, he was appointed a judge and knighted by James II. In later years he retired to Austwick Hall and was buried in the parish church at Clapham.