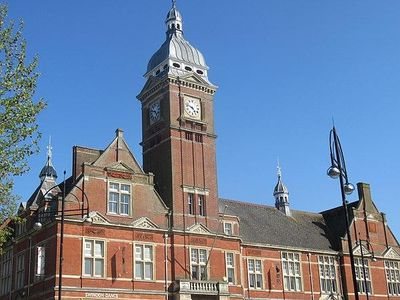 Swindon ) is a large town in the ceremonial county of Wiltshire, South West England, between Bristol, 35 miles to the west, and Reading, the same distance to the east; the town is 71 miles west of London. The population estimates for the UK, England and Wales, Scotland and Northern Ireland: mid 2018 released by the Office for National Statistics on 30 June 2018 estimated a population of 192,599 for Swindon. At the 2011 census, it had a population of 182,441. The Town Development Act 1952 led to a major increase in its population.
Swindon railway station is on the line from London Paddington to Bristol. Swindon Borough Council is a unitary authority, independent of Wiltshire Council since 1997. Residents of Swindon are known as Swindonians. Swindon is home to the Bodleian Library's book depository, the English Heritage National Monument Record Centre, the headquarters of the National Trust, on the site of the former Great Western Railway works, and the Nationwide Building Society, and a Honda car manufacturing plant, which is due to close in 2021.